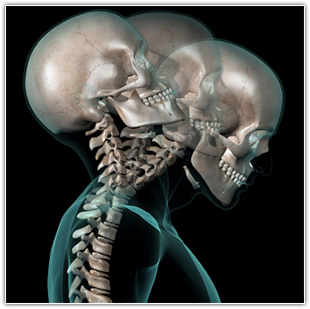 There you are, driving your vehicle grooving to the beat in your red Mustang as you watch the kid with the purple Mohawk when – Wham!  You’ve just been rear ended.  It all happens so fast. An entire whiplash injury occurs in about 1/10th of a second — the length of an eye blink.

You’re shaky and disoriented, but you calmed yourself down and got out of your car, relieved that there was only the tiniest dent on the left side of your bumper. You exchanged information, but neither car was too damaged and you both considered it no big deal.

But two weeks later, you were not better. Your neck hurt all the time, the base of your skull was really sore, you had a headache when you woke up in the morning and your left shoulder was starting to bother you.

Whiplash and whiplash-associated disorders (WAD) represent a range of injuries to the neck caused by or related to a sudden distortion of the neck usually in an auto accident, usually when the vehicle has been hit in the rear.  When a vehicle is struck from the rear it is accelerated forward, causing the seatback to push against the occupant’s torso and propel it forward.

The head lags behind the torso until the neck reaches its limit of distortion, then the head is suddenly accelerated by the neck much like the tip of a whip, hence the term whiplash. These extreme motions push your neck muscles and ligaments beyond their normal range of motion.

Using live occupants in rear end crash tests, researchers have found head accelerations can easily reach 9 Gs of force, or nine times the force of gravity. What this means is that the human head—which weighs about 10 pounds, on average—suddenly weighs 90 pounds.

Also, the number of milliseconds that takes place during the whiplash process after impact (~500 msec.) and the fact that voluntary muscle contraction takes longer (~800 msec.) makes it next to impossible to adequately “brace” prior to impact, even when the collision is anticipated.

Although whiplash is most frequently the result of a rear-end collision, whiplash can occur in several other situations including:

The most common symptom reported by whiplash victims is pain due to mild muscle strain or minor tearing of soft tissue. Other injuries include nerve damage, disc damage, and in the most severe cases ruptures of ligaments in the neck and fractures of the cervical vertebrae. Minor whiplash injuries generally are associated with pain and decreased range of motion in the head and neck. These symptoms may or may not be felt immediately. It is estimated that most whiplash injuries are not felt for several hours, days, and in some cases even months or years following the accident.

Studies are clear that whiplash patients make a faster, less painful recovery, return to work and could return to activities faster and are the most satisfied when utilizing chiropractic when compared to covering up the symptoms with medications that have negative side effects that interfere with being able to think and ultimately, reduce productivity.

Whiplash and whiplash-associated disorders are common afflictions in the United States, with up to 42% of patients exhibiting long term symptoms. Most treatments used in dealing with this ubiquitous problem have not been shown to be effective by rigorously controlled scientific studies. The one exception to this finding is Chiropractic spinal manipulation — also called Spinal adjustment!

Through the use of carefully controlled pressures directed at the spine and various physical therapy modalities, combined with that of exercise and nutrition, whiplash sufferers have a better outcome.

What is important is that ALL Research has shown that chiropractic has been a very effective approach to healing whiplash. In fact, the findings of success with this problem are so compelling it led to the conclusion that Chiropractic Is The Only Proven Effective Treatment For Whiplash In Chronic Cases!

Contact Heil Chiropractic if you have been in any car accident. Whiplash neck and back injuries can happen even after a fender bender or broken tail light and can remain hidden for weeks, months and sometimes even years before telltale symptoms emerge such as headaches, neck pain, stiffness, numbness in hands, dizziness, fatigue, irritability memory loss and even arthritis.